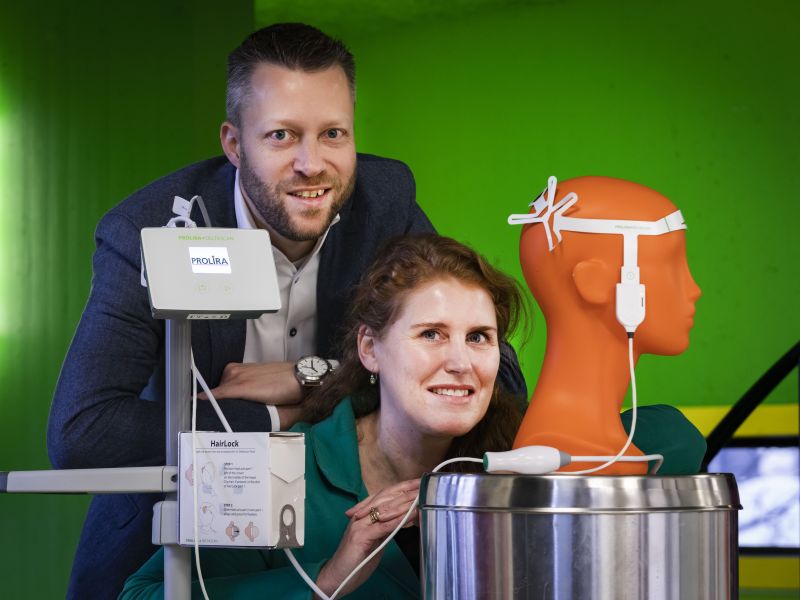 "Mibiton´s support is extremely valuable for Prolira in realizing our dream of revolutionizing delirium care and improving patient outcome around the globe."

“The revolving fund turned out to be a golden formula”
The ministries saw the appeal of a fund for new equipment, but only on the condition that the business world should provide at least half of the capital. Van der Meer: “Businesses, however, were not willing to invest in a fund with a long-term profitability. They were willing to pay for the use of the equipment, because that could serve their own interests directly, and is possible on a research budget. From my position at NIABA, I then suggested implementing an industrial revolving fund. The principle is that the government does not demand from businesses a contribution ex ante, but ex post. If, for example, the government were to invest ten million guilders in new equipment, businesses would offset this by their own ten-million-guilder investment through paying for the use of that equipment. That money then finds its way back into the fund, allowing for renewed financing of equipment investments”.

Due to the revolving nature of the fund, Mibiton relied on loaning equipment only to those organisations who could reasonably be expected to fully refund the costs incurred in time. “It would never have been possible without a suitable fund manager”, Van der Meer argues. “It was the late Hans Grande who managed to get Mibiton rolling. He was the mainstay of the Mibiton steering group, with its representatives from knowledge institutes, businesses, and financial institutions, who had to cast their verdict on each project application. He had to assess these applications at the most detailed level, and use that assessment to indicate whether a new company offered adequate perspective, for example. It was his assessments that were usually the deciding factor in the investment decisions.”

Van der Meer points out that Mibiton is the first example of a very successful investment programme where the business world repays government subsidies ex post, and doubling the turnover in doing so. “If the government had held to a fund where businesses were required to deposit funds beforehand, Mibiton would have been much less successful. The revolving fund is a golden formula which has made it possible to double government investments in biotechnology using private funds, all for the benefit of the economy and society of the Netherlands.”

“The run-up to Mibiton began in 1987”
In 1987 the Ministry of Scientific Policy was in the process of developing a new innovation bill. “One of the questions that needed to be answered was: ‘Which scientific fields are likely to become of interest for the Dutch economy. The answer: IT and biotechnology. IT was a very recognisable answer for the consumer due to the rise of the personal computer. Biotechnology was much less visible, despite the promising innovations in new medication and new agricultural applications. In any case, it led to some measure of additional attention to biotechnology from that point on. In fact, the run-up to Mibiton began as early as 1987”, explains Van Beynum.

Colja Laane, Chairman of the Mibiton foundation since 2009

“Dozens of biotechnology firms have used our fund to launch themselves”
Laane: “These days, however, we are consorting with other investors more frequently, allowing us to share the financial risks. The established venture capital funds have come to know us. As have more and more new funds, all looking for quality investments. Despite this abundance of capital, there is still room for Mibiton. With many years of experience, we know what we are talking about. If we feel that something is ‘just right’, we will offer a company the benefit of the doubt. The fact that over 90% of our investments fully pays off shows that we do not take exceptional risks. Some companies may come to find themselves quite strapped for cash. But if that can be offset by a positive chance of improvement, we will offer 6 to 12 months delay of payment”.

These days, Mibiton has a broader scope. At the request of EA&C, Mibiton has adjusted its criteria to allow entrepreneurs outside the life science & health industry to apply for a loan, but only if their innovations have a link to this industry. “For example, we would not help finance equipment that would let you develop satellites, but we would finance equipment that lets you apply a nano-coating to a catheter for medical use. Another example is equipment that lets you analyse fish DNA in water, making it possible to tell which fish are found there”, Laane clarifies.

Since 1994, Mibiton has financed the purchase of equipment for 100 companies, for a combined amount of 32.7 million Euros. As far as Laane is concerned, Mibiton will continue to do what it has always done. “Our work field has become broader, making it possible for us to contribute to all entrepreneurs who are somehow committed to life sciences & health. At the same time, we aim for improved cofinancing, while ensuring we continue to monitor our position amid the other financers. Our strength lies in the fact that we can use our expertise and a relatively small overhead to review applications in a relatively short amount of time. We help companies on a non-profit basis, offering them the benefit of the doubt, and taking a risk most venture capitalists and banks would not be willing to. We do so responsibly, as at least 90% of our loans are returned with interest. Dozens of biotechnology firms have used our fund to launch themselves, making Mibiton an undeniable innovation accelerator. In short, Mibiton continues to provide an important contribution to innovation even in 2019. Experienced initiators Rob van der Meer and Gerard van Beynum, together with Vera Blom – who is still our mainstay – have more than enough reason to feel proud.”

“Entrepreneurial researchers at the universities could set up their own businesses”
In 2000, Mibiton continued under the flag of the BioPartner programme, developed by Horning and his colleagues in close partnership with an external focus group, which included Gerard van Beynum, Chairman of Mibiton, and Koen Wiedhaup, working for Organon at the time. From the perspective of this programme, universities were invited to design so-called incubators, spaces where entrepreneurial researchers could set up their own businesses. One benefit was eligibility for the BioPartner first stage grant, an early phase financing scheme, to proceed from idea to proposition, and for starting capital from the BioPartner Start-up Ventures fund. Nowadays, this type of support still exists, if in a somewhat different form. BioPartner also functioned as the driving force behind a network that brought together scientists, entrepreneurs, financers, and governments.

“Mibiton now operates on a wider front”
“Until five years ago, the government focused specifically on life sciences. The care industry has been added to their horizon. In line with this shift in policy, the new mission-driven innovation policy now looks for solutions to societal issues, such as in the field of dementia. Mibiton is also operating on a broadened front, and also finances equipment for companies in chemistry or agri-foods, as long as they have a link to the life sciences. Notwithstanding that fact, the fund is mainly active in red biotechnology for medication and vaccines.”

Stay up to date with the latest news!